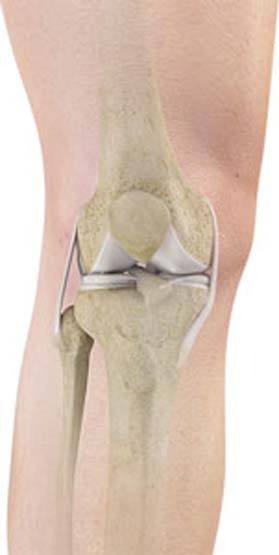 The knee joint, which appears like a simple hinge-joint, is one of the most complex joint. It consists of the femur (thighbone), tibia (shinbone) and patella (kneecap).

The knee is a synovial joint, which means it is lined by synovium. The synovium produces fluid lubricating and nourishing the inside of the joint.

Articular cartilage is the smooth surfaces at the end of the femur and tibia. It is the damage to this surface, which causes arthritis.

The femur (thighbone) is the largest and the strongest bone in the body. It is the weight-bearing bone of the thigh. It provides attachment to most of the muscles of the knee.

The two femoral condyles make up for the rounded end of femur. Its smooth articular surface allows the femur to move easily over the tibial (shinbone) meniscus.

The fibula, although not a weight bearing bone, provides attachment sites for the Lateral Collateral Ligaments (LCL) and the biceps femoris tendon. The articulation of tibia and fibula, also allows a slight degree of movement, providing an element of flexibility in response to the actions of muscles attaching to the fibula.

The medial and the lateral meniscus are thin C-shaped layers of fibrocartilage, incompletely covering the surface of the tibia where it articulates with the femur. The majority of the meniscus has no blood supply and for that reason, when damaged the meniscus is unable to undergo the normal healing process that occurs in the rest of the body. In addition, meniscus begins to deteriorate with age, often developing Menisci degenerative tears. Typically, when the meniscus is damaged, the torn pieces begin to move in an abnormal fashion inside the joint. The menisci act as shock absorbers, protecting the articular surface of the tibia as well as assisting in rotation of the knee. As secondary stabilizers, the intact menisci interact with the stabilizing function of the ligaments and are most effective when the surrounding ligaments are intact.

The anterior cruciate ligament (ACL) is the major stabilizing ligament of the knee. The ACL is located in the center of the knee joint and runs from the femur (thigh bone) to the tibia (shin bone), through the center of the knee. The ACL prevents the femur from sliding backwards on the tibia (or the tibia sliding forwards on the femur). Together with Posterior Cruciate Ligament (PCL). ACL stabilizes the knee in a rotational fashion. Thus, if one of these ligaments is significantly damaged, the knee will be unstable when planting the foot of the injured extremity and pivoting, causing the knee to buckle and give way.

Much less research has been done on the posterior cruciate ligament (PCL) because it is injured far less often than the ACL. The PCL prevents the femur from moving too far forward over the tibia. The PCL is the knee’s basic stabilizer and is almost twice as strong as the ACL. It provides a central axis about which the knee rotates.

ü LCL (Lateral Collateral Ligament), entirely separate from the articular capsule, connects the lateral (outer) epicondyle of the femur to the head of the fibula and resists varus (bending in) force.

Biomechanics of the Knee

The knee joint is a modified hinge joint. The active movements of the knee joint are described as flexion, extension, medial rotation and lateral rotation.

When the knee is flexed or bent, the cruciate ligament is taut and the collateral ligaments are relaxed. Maximum flexion of the knee is 120-150 degrees.

When the knee is extended or straightened, the lateral and medial collateral ligaments as well as the ACL are taut. Maximum extension of the knee is 5-10 degrees.

This movement can only be achieved while the knee is in flexion. The cruciate ligaments control medial rotation of the tibia by twisting around each other to enable this movement. Maximum internal rotation is 30-40 degrees.

This movement also requires the knee to be flexed in order to rotate laterally. The cruciate ligaments control lateral rotation of the tibia by untwisting around each other to enable this movement. Maximum external rotation is 30-40 degrees.