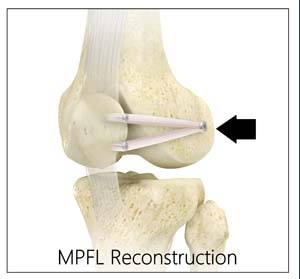 Medial collateral ligament (MCL) is one of the four major ligaments of the knee that connects the femur (thigh bone) to the tibia (shin bone) and is present on the inside of the knee joint. This ligament helps stabilize the knee. An injury to the MCL may occur as a result of direct impact to the knee. An MCL injury can result in a minor stretch (sprain) or a partial or complete tear of the ligament. The most common symptoms following an MCL injury include pain, swelling, and joint instability. If the overall stability of the knee is intact, your doctor may recommend non-surgical methods including physical therapy, and bracing. Surgical reconstruction is recommended for MCL tears which fail to heal or those associated with other ligament injuries. MCL reconstruction is a minimally invasive technique that involves use of a tendon graft to reconstruct the injured MCL.

Medial collateral ligament reconstruction is contraindicated in patients with degenerative changes in the medial or lateral compartment, active infection, ligament instability, and simultaneous presence of other chronic diseases that can hamper surgical management or compliance to postoperative rehabilitation instructions.

An MCL injury can be diagnosed with a thorough physical examination of the knee and diagnostic imaging tests such as X-rays, arthroscopy, and MRI scans. X-rays may help rule out any fractures. In addition, your doctor will often perform valgus stress test to check for the stability of MCL. In this test, the knee is bent approximately at 30° and pressure is applied on the outside surface of the knee, excessive pain or laxity is indicative of medial collateral ligament injury.

In the first two weeks after the surgery, toe-touch and weight-bearing is allowed with the knee brace locked in full extension. After 2 weeks 0° to 30° of motion is allowed at the knee. At 4 weeks, knee flexion is allowed from 60° to 90° of motion and full weight bearing is permitted. At 6 weeks, the brace is removed and you are allowed to perform full range of motion. Crutches are often required until you regain your normal strength.

Knee stiffness and residual instability are the most common complications associated with MCL reconstruction.